Christmas Eve is a day of celebration for many around the globe, and thousands of people from all walks of life flock to Bethlehem’s Manger Square to take in the sights of the season. OneVoice Palestine saw the day as primed for mass public engagement and sent 80 of our best youth leaders from 22 chapters in the West Bank to promote popular resistance against the occupation and conflict among the crowd.

Preparations for this event took place weeks ahead of Christmas Eve, with the staff and volunteers meeting, discussing, and planning to execute what turned to be one of OVP’s biggest events in years. 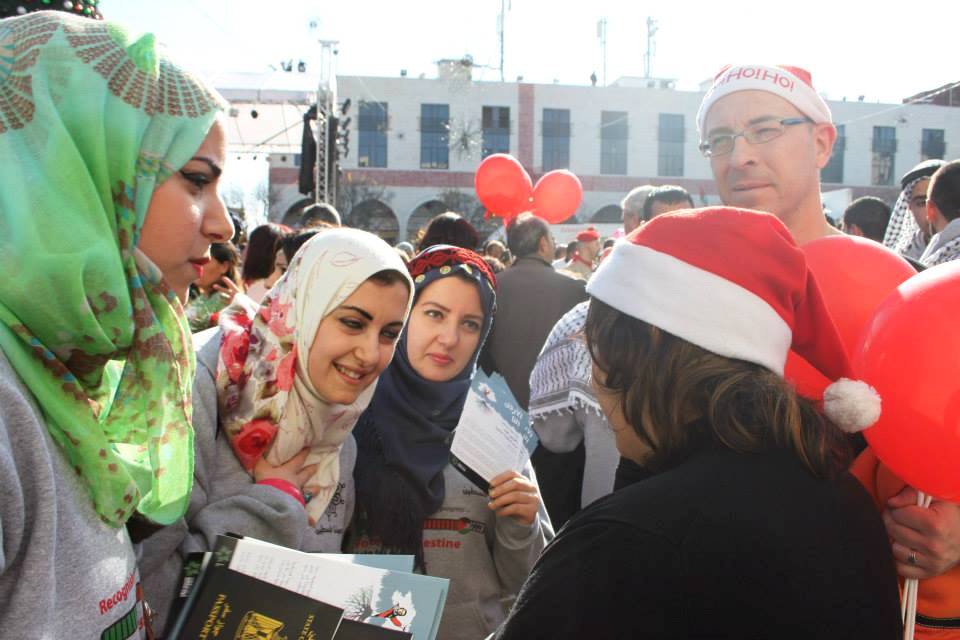 OVP coordinated with the chapter heads of Bethlehem, Hebron, Nablus, and Jericho, and it would be a lie to say there wasn’t any pressure on the staff. There were legitimate concerns about logistics and safety. Adding to the pressure was the known presence of media outlets from local agencies and news reporters from around the globe. We needed to present OneVoice’s message and vision for nonviolent activism and the two-state solution in the best way possible. We needed to paint an inspirational image for thousands of Palestinians and tourists visiting Bethlehem on Christmas Eve.

Early Wednesday morning, the youth leaders arrived in OVP’s office in Bethlehem. All donned a specially designed sweatshirt that encouraged tourists to speak to their communities about Palestine through acknowledging Palestinian rights of freedom and self-determination. OneVoice staff briefed the youth leaders about the program and divided them into small groups to reach the most people. The staff and youth leaders walked the main street of Bethlehem wearing Palestinian keffiyehs, checkered black and white scarves that are a symbol of Palestinian nationalism and an icon of Palestinian solidarity.

When we reached Manger Square, morale was high. We wanted this event to succeed, but more importantly we wanted our voices to be heard. We set up a small stand with fliers and coffee. The coffee cups carried the OneVoice logo and messages from our previous “Wake Up! What is Your Role?” campaign. We printed and handed out hundreds of brochures and “passports” with clear messages about non-violent activism, the two-state solution, the Arab Peace Initiative, and a message from our staff and youth leaders to the international community to recognize Palestine as a state on the 1967 borders. 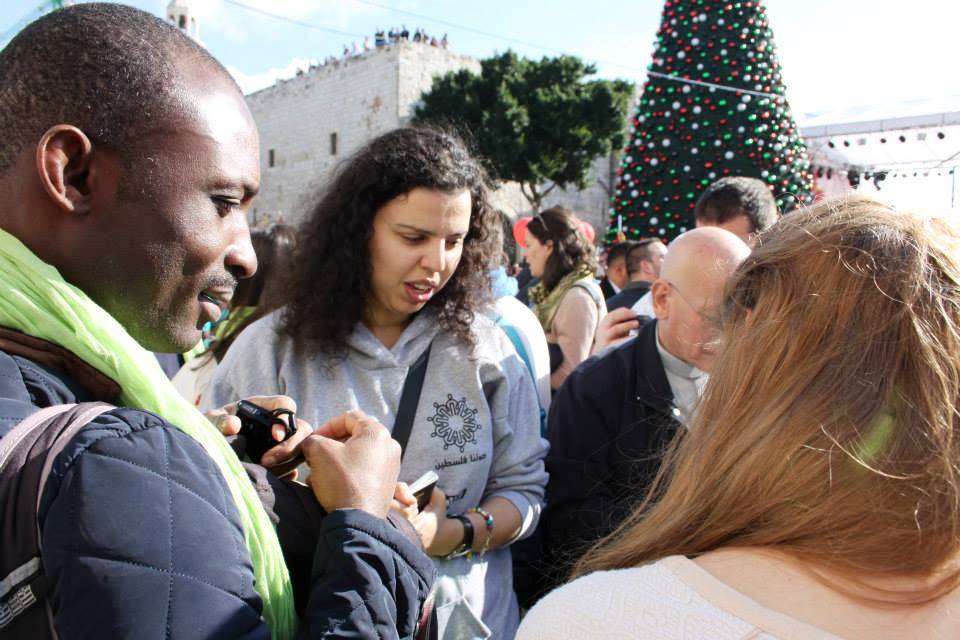 Palestinians visiting Bethlehem found the event intriguing. They asked the youth leaders about the logo and the initiative. OneVoice offered the crowd coffee and engaged many in long conversations about Palestinian national interests. In some cases the conversation turned into long debates about the Palestinian leadership’s vision and non-violent activism. Not all Palestinians we met in Bethlehem showed support for our work, but the majority was pleased by the youth leaders’ enthusiasm and courage. 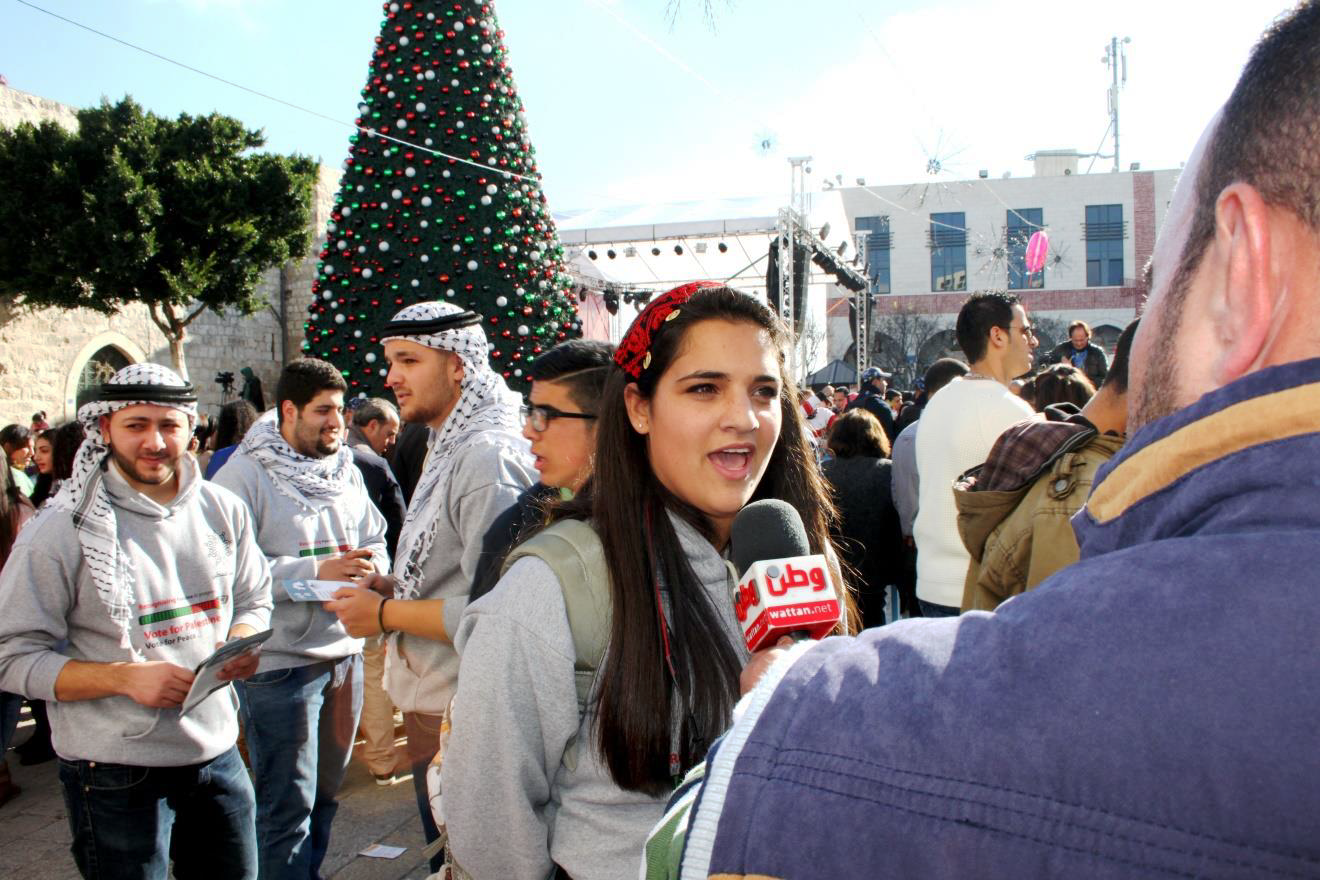 The event was remarkable. The keffiyehs were everywhere and the passports were a big hit; everyone wanted one! Internationals nodded in approval and encouraged the youth leaders to continue down the path of non-violent activism. They took photos with our activists and one in particular was shouting “two-states” at the camera! Local media outlets followed us around, too. They interviewed OVP Executive Director Samer Makhlouf and senior activist Raya Fatayer. Two hours later we ran out of passports! We were also running low on fliers. We didn’t anticipate how huge the crowd was.

Afterward, the youth leaders marched back to our office, exhausted but very proud of what we accomplished. For many youth leaders it was an extraordinary experience. For others it was a quick stop to refuel. As for the staff, we are excited for the next step. OneVoice generated momentum that day. It was a much needed win to ignite hope and a reminder why we all love doing what we do.

We dined as a team later that evening. OneVoice staff thanked everyone and reminded them why our work is important. We also took the opportunity to give out certificates to the youth leaders who participated in our training program, and celebrated the hard work of our senior youth leaders who had a wonderfully constructive year. That evening, we looked around the room and saw hope in the eyes of our youth leaders. OVP’s community shined as a great example of what hard work, popular resistance, and a simple idea can accomplish. 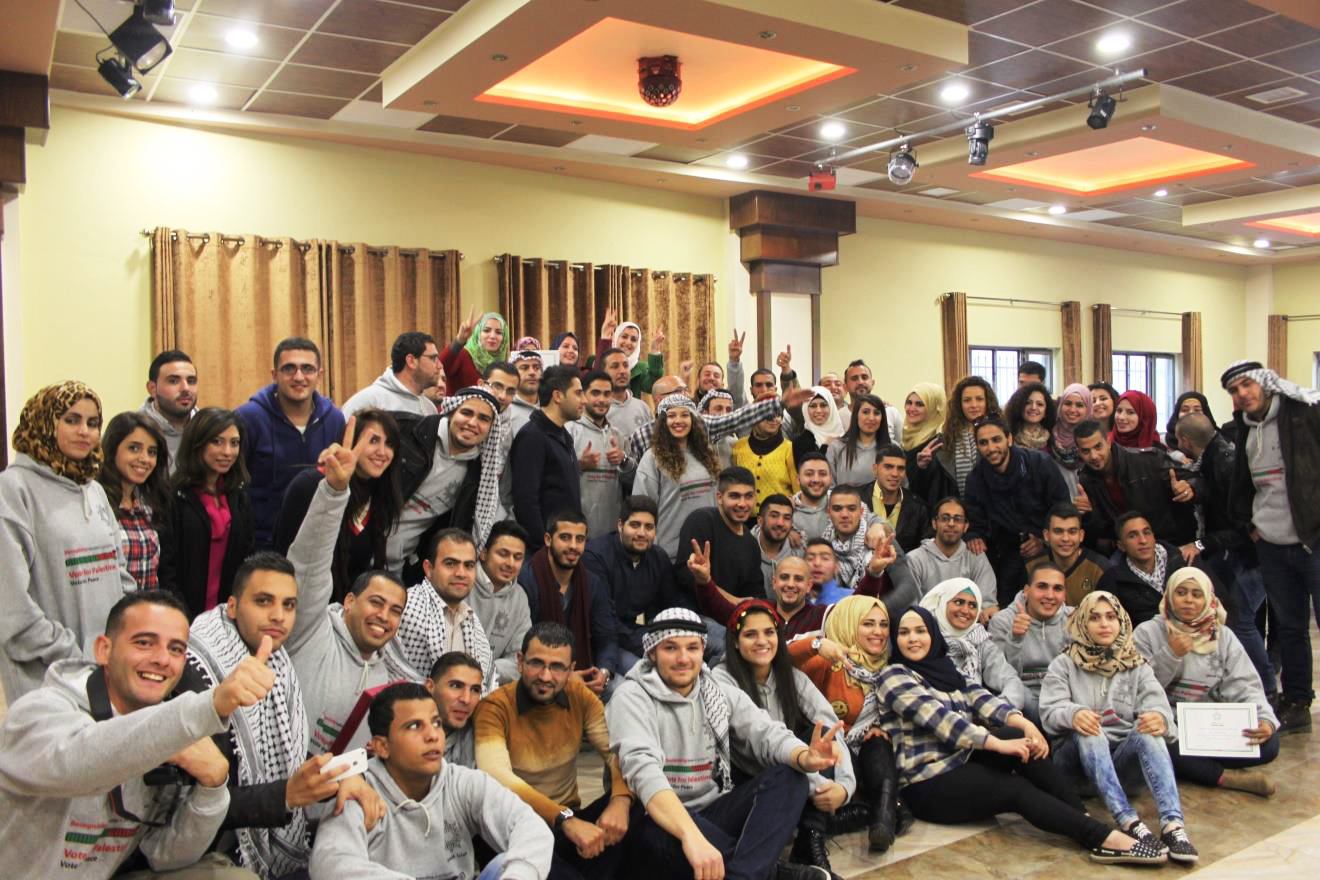