You can say that olive oil runs in the veins of every Palestinian. The small fruit is a vital part of Palestine's economy, its culture, and its people.

As a part of OneVoice Palestine's "The Land is Ours" campaign, activists are coordinating several olive harvesting activities with local Palestinian farmers in the West Bank in the face of Israeli settler violence and vandalism.

On October 15, OneVoice Palestine collaborated with the Governorate of Salfeet to organize an olive harvest activity south of the city in the village of Dier Istya. The Palestinian National Security Forces along with several local organizations, including the Wall Resistance Commission and the Palestinian Ministry of Agriculture, participated in this event.

Almost 100 participants joined the activity to highlight the importance of the harvest for Palestinians as a form of popular resistance against the Israeli occupation. Salfeet is surrounded by three major settlements and local farmers are harassed by settlers on daily basis, burning trees and threatening farmers with lands close to the separation wall.

Mr. Imad Abu Baker, Governor of Salfeet, shared a few words with the activists and encouraged young Palestinians to participate in non-violent activities to protest Israeli policies of building settlements in the West Bank.

“These sort of activities embody non-violent resistance on the ground, and those trees will remain here with deep roots in our land, like the nobility of our people,” he said.

On October 18, OneVoice chapters from Jericho, Nablus, and Ramallah joined local farmers in the village of Ebbwien near Ramallah. OVP’s staff arrived early on the scene and coordinated with the village counsel to bring more volunteers to help with olive harvest.

Thirty young volunteers from OVP joined 15 farmers and their families for hours helping with the olive harvest and sharing chants and singing folk songs, a tradition that remains linked to the harvest season in Palestine. Local media joined OneVoice throughout the activity and spoke to some of our volunteers about non-violent activism.

“Olive trees are a big part of our culture,” said OneVoice youth leader Raya Fatayer to Wattan News. “The harvest season is a national event to celebrate our Palestinian traditions. We see Israeli violations against the olive trees in many areas in Palestine, but we will continue to work with local farmers to display solidarity; this land will remain Palestinian.”

More images can be found in our gallery. 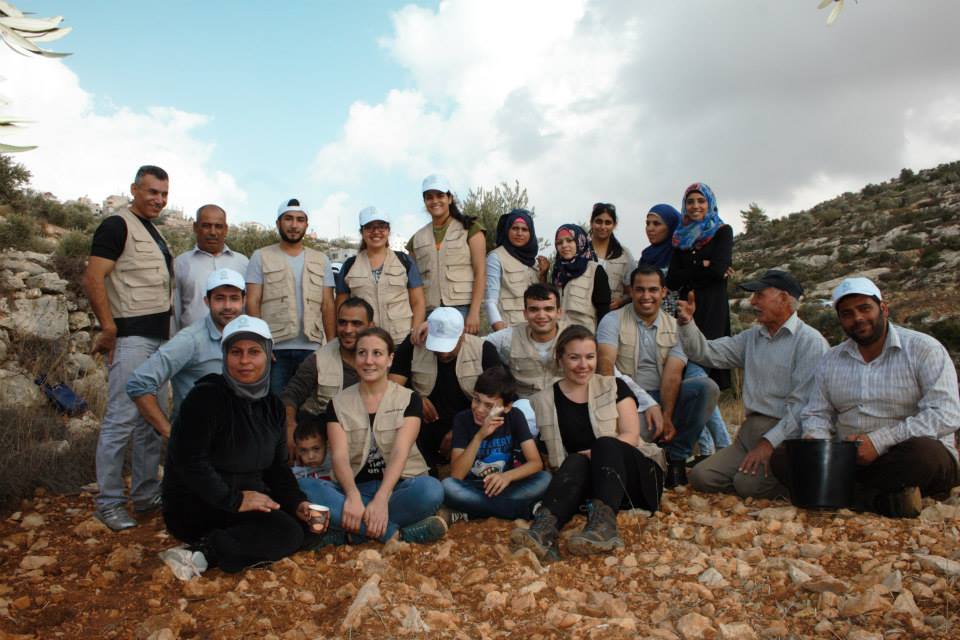 OneVoice chapters and international activists with the farmers in Ebbwien in a display of solidarity during the olive harvest season.